Why were atomic bombs used on Japan? 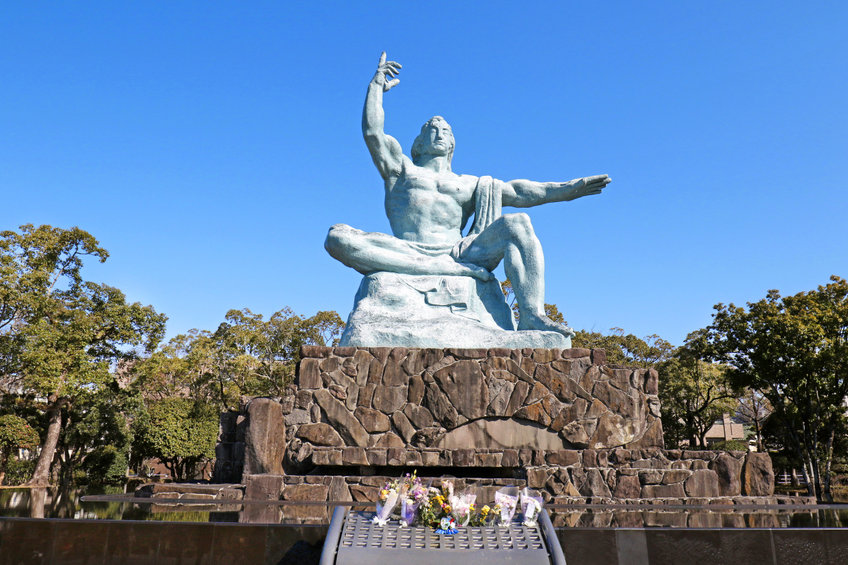 Why were atomic bombs used on Japan?

Nuclear bombs were dropped on Hiroshima and Nagasaki. Why this powerful weapon of destruction was used is still a subject of debate. The perpetrator, the U.S., says it was to quickly end the war with Japan. Some say it was to give the U.S. superior relations with the Soviet Union.

The reasons for the atomic bombings stem from the complicated world affairs and diplomacy at the time.

At the Potsdam Conference on August 2, 1945, the decision was made that the Soviets would enter the war with Japan. They planned to occupy part of Japan after the war, just like they did in Germany. However, the U.S. did not want the Soviets to occupy part of Japan, as it would mean the expansion of socialist countries. Instead, the U.S. wanted Japan to be an independent capitalist country. Therefore, the U.S. had to use any means necessary to make Japan surrender before the Soviets joined the war with Japan, which was expected to happen in late August 1945. The U.S. resorted to dropping atomic bombs.

What was happening at the end of World War II with regard to the atomic bomb?

At the time of World War II, there were two major wars going on in the world.

One was the war in Europe, fought mainly by “Germany” and the allied forces of U.S.A.  UK and Soviet Union. The other was the Pacific War, which was fought mainly between “Japan” and the “United States”. Both wars ended with the defeat of Germany and Japan in 1945.

Germany was being attacked from the west by the U.S. and Great Britain, and from the east by the Soviet Union. It was clear that Germany would be defeated before Japan would.

Therefore, in February 1945, the U.S, the U.K., and the Soviet Union held a conference to decide how to deal with the occupied German and Eastern European countries after the war. This meeting was called the Yalta Conference.

At the Yalta Conference, the parties mainly discussed how they would treat the Eastern European countries. As for the German territories, it was agreed that each country would manage the areas it occupied as they were. However, this led to a tragedy—the division of Germany.

The confrontation between the U.S. and the Soviet Union began gradually around the time of the Yalta Conference.

The Soviet Union was a socialist country and was trying to expand its territory, while the U.S. was a capitalist country that felt threatened by the Soviet Union. Socially and politically, they were not mutually cooperative partners.

However, at that time, they were working together because they had common enemies—Germany and Japan. Germany surrendered in May 1945.

This left the German lands in a state of “divide and conquer” by Allied countries, and tensions between the U.S. and the Soviet Union began to rise.

The Soviet Union tried to create a socialist state in occupied Germany, and the U.S. and the U.K. tried to prevent it.

Germany was later divided into socialist East Germany and capitalist West Germany. The fact that half of Germany, originally a capitalist country, was taken over by socialism was a “failure” for the capitalist camp.

To win the war against Japan, the U.S. demanded that the Soviet Union enter the war and cover for them. However, this would lead to the next problem.

The war between Japan and the U.S. was reaching its climax.

In the Battle of Okinawa, American soldiers were forced to shoot local civilians-including women and children—who were fighting back, and local families committed suicide with hand grenades right in front of them.

The Soviet Union ignored the treatment of Eastern Europe, which had been agreed upon at the Yalta Conference, and turned those countries into socialist countries and the vassal states of the Soviets.

The Soviet Union at that time was not as easy to deal with as the U.S. had expected.

If the Soviet Union had entered the war against Japan and occupied Japanese territory, it would lead to the tragedy of the partition, as happened in Germany, and the further expansion of socialism.

In addition, Japan was an island nation facing the Pacific Ocean. The Soviet occupation of Japan would give the Soviet Union excellent military ports and a frontline base from which to launch its fleet in the Pacific. This was a strategic situation that the U.S. had to prevent.

Competition on Research into the Atomic Bomb

Germany’s defeat in the war led to another major event.

This was the “outflow of researchers and research materials on the atomic bomb.”

Research on the atomic bomb had been conducted in many countries. The most advanced in this research were Germany, the U.S., and the Soviet Union.

The overwhelming destructive power of the atomic bomb had already been predicted, and it would be a political and military disadvantage if an enemy country built an atomic bomb first. Therefore, the U.S. began research and development (Manhattan Project) in 1942, and together with Great Britain, had already agreed to drop an atomic bomb on Japan in 1944.

Germany lost the war before the completion of the atomic bomb.

Many of Germany’s atomic bomb researchers and research materials were taken away by the Soviet Union. If the U.S. did not complete the atomic bomb first, the U.S. would be at a disadvantage in the postwar confrontation with the Soviet.

Because relations between the U.S. and the Soviet Union had been deteriorating it was even more important to each country to complete the atomic bomb first.

A second meeting, called the Potsdam Conference, was held between the U.S. and the Soviet Union in July 1945. The main topic was what to do about Japan, which was nearing the end of its war.

This was the same decision made at the Yalta Conference and was a natural assertion for the Soviet Union, which wanted to expand its territory in Japan.

In particular, the Soviet Union wanted to occupy Hokkaido, where it could build an ideal military port and military base for the Pacific.

The U.S. finally succeeded in conducting a nuclear test

Thus, on July 16, before the end of the talks, the world’s first nuclear test, the Trinity Test, was conducted. This effectively put the atomic bomb into practical use.

Mankind now had the most powerful weapon of destruction in its arsenal.

President Truman immediately notified the Soviets about the success of the test and the practical use of nuclear weapons.

However, this was not surprising to General Secretary Stalin of the Soviet Union. Through espionage, he had already been made aware of the atomic bomb’s status.

In the end, the Potsdam Conference proceeded at the pace of the Soviet side, and the U.S. did not achieve a positive outcome.

The Soviet ‘s entry into war with Japan was imminent

At the time of the Potsdam Conference, the Soviet Union would enter the war against Japan in August. The areas occupied by each country would be administered by that country as they were.

As a result, the U.S. had a “time limit” to force Japan to surrender before the Soviet Union’s full-scale entry into the war.

The Potsdam Conference ended on August 2.

The Soviet army was expected to begin its invasion of Japan by the end of August. The areas occupied by the Soviets would become Soviet territory after the war.

Therefore, the U.S. urged Japan to surrender as quickly as possible.

At the time, however, Japan was using diplomatic tactics to end the war on the most favorable terms possible. Therefore, the Japanese were trying to delay negotiations.

The atomic bomb was dropped.

For the U.S., this was a disaster. However, the U.S. had an ace in the hole—the atomic bomb.

During the Potsdam Conference, President Truman had given the order to drop the atomic bomb. However, to prove the existence of the atomic bomb to the Soviet Union, it was necessary to actually drop the bomb.

Preparations began at the end of July, and on August 6, the atomic bombing of Hiroshima was carried out.

The Soviet Union knew that the U.S. was in a hurry to end the war. Therefore, it made preparations for the invasion of Japan during the Potsdam Conference.

On August 8, the Soviet Union declared war on Japan, and launched an invasion on August 9. A simultaneous attack began in Manchuria, the Japanese-occupied territory. On August 9, the U.S. carried out another atomic bombing, this time on the city of Nagasaki.

The U.S. and the Soviet Union moved very quickly from August 6 to August 9, indicating that both sides were hurrying in response to the dropping of the atomic bombs.

On August 14, Soviet troops began advancing on the northern islands of Hokkaido and engaged local garrisons in battle.

On August 15, the Japanese government decided to surrender unconditionally due to the entry of the Soviet Union into the war and the dropping of two atomic bombs.

The war in the Pacific was over.

After hearing of Japan’s defeat, the Soviet Union did not stop its invasion. The Soviets continued and occupied the Northern Territories, ignoring the condemnation of other countries.

Because the war was over, they could not advance any farther, and the Soviet forces stopped their invasion without conquering Hokkaido.

However, the occupied Northern Territories remained under the control of the Soviet forces.

This is the issue of the Northern Territories that continues to this day.